Hey, Guys Hi!!!! I hope you all are doing well. Today Here in this article, I am going to share with you the Kawasaki Ninja H2R Hyper Sport Bike Complete guide Including: 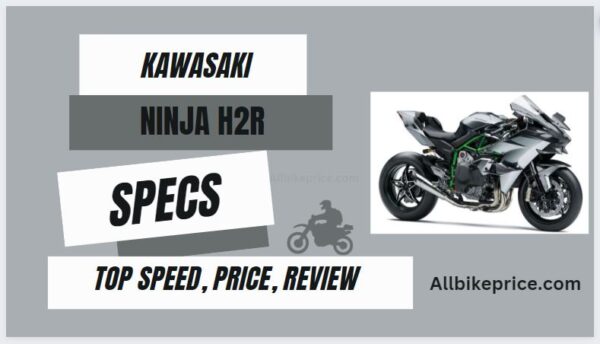 The actual power output of the supercharged Kawasaki Ninja H2R closed-course motorcycle is made possible only through a system of finely-tuned and nicely crafted high-quality components.

The Kawasaki Ninja H2R motorcycle design projects intense force becoming a product of functional beauty. Each angle is designed to contribute unprecedented performance and style from the carbon-fibre wings to the front fender.

The compact IMU allows inertia along 6 Degrees of Freedom to be controlled (acceleration along longitudinal, transverse, and vertical axes, plus roll rate and pitch are measured). 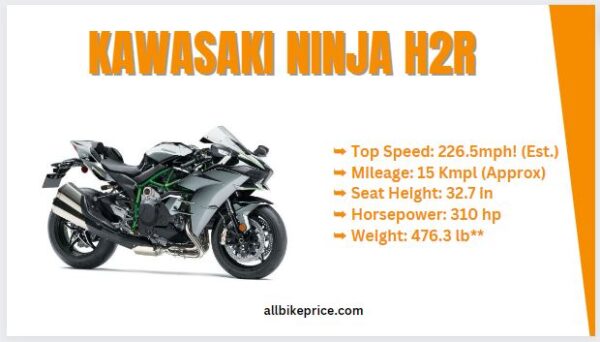 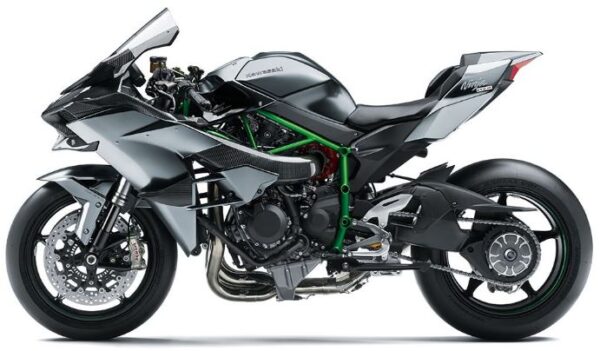 ➥With many fluffed attempts and wheelies, the Kawasaki Ninja H2R can do 0-60 mph in 2.93 seconds. 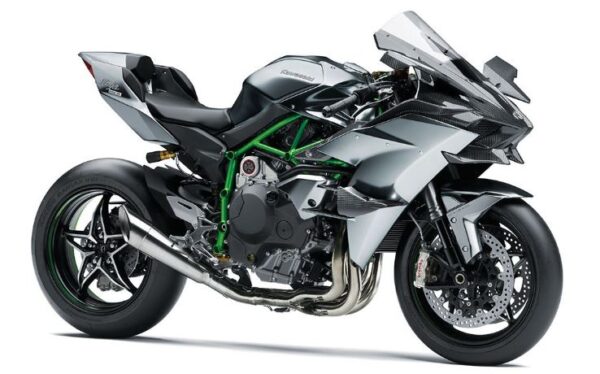 The supercharged engine is balanced to deliver great acceleration and fuel efficiency. This balance increased the engine’s thermal efficiency through a high compression ratio. The premium dog-ring transmission is designed for racing engines with high performance.

It allows for quick, smooth shifting. This configuration does not shift gears into position but instead keeps them in place with the lightweight dog rings moving to engage them.

The planetary gear was created using technology from an Aerospace Company. It transfers power from the crankshaft to drive the impeller at incredibly high rpm.

For high precision and durability, the complex shape of this impeller is 3D-machined from forged aluminium. The impeller spins at nearly 130,000 rpm and pumps more than 200 liters of air into the engine every second.

The centrifugal-type supercharger was chosen for its high-rpm performance. It is extremely efficient at compressing air up to 2.4x atmospheric pressure while minimizing heat.

Because the supercharger is so efficient, there is no need for a large, bulky intercooler to cool the compressed gas.

The supercharger was specifically designed to match the engine. This allows for high-efficiency operation in a wider range than what is possible with a standard supercharger.

The Ohlins(r), TTX36 rear shock is fully adjustable with a remote preload adjuster. It provides precise damping to enhance traction, comfort, and feedback to the rider. The KYB(r), AOS-II (Air Oil-Separate), and low friction cartridge fork have great action.

The initial stroke is smooth and compliant, and then progressive damping at the end. Preload and compression can be adjusted via the front fork.

The Ninja H2R motorcycle is equipped with dual Brembo Stylema (r) front calipers that are radial-mount instead of four pistons and semi-floating, 330mm discs for powerful braking.

This lightweight, cast aluminum wheels were made for the Ninja H2R motorcycle using data from Kawasaki’s World Superbike Team. The Ninja H2R has a huge 200mm rear tire that transmits power down to the ground.

While many traction control systems respond to wheel slip, the IMU-enhanced feedback Kawasaki TRaction Control version (KTRC) predicts conditions and intervenes before slippage exceeds the range of optimal traction. Riders can choose from nine modes to control how KTRC intervenes while riding. KTRC can be completely disabled.

This system allows riders the ability to adjust engine braking to their preference. The engine braking effect of the system is decreased when activated. This reduces interference while riding on the circuit.

A contactless quickshifter, similar to the engine’s powerful power and the dog-ring gearbox, allows for quick upshifts that allow for smooth acceleration. For smooth and quick acceleration, the KQS allows for clutchless downshifts.

A special topcoat allows certain scratches to be repaired, allowing the paint to retain its high-quality finish even through normal wear.

They have angled winglets that help smoothen airflow around the tips of the wings. A rigid carbon-fiber upper cowl with an aerodynamically designed rear cowl allows for efficient airflow, reducing resistance. Additionally, a chin spoiler contributes to greater stability and downforce generation. 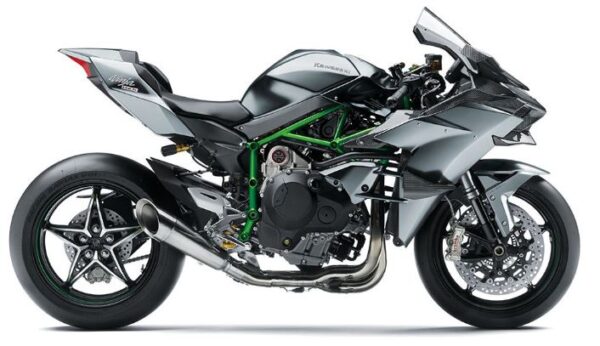 That was all about the Kawasaki Ninja H2R Top Speed, Price, Specs, and Review, we hope it will be helpful for you to buy or sell this model bike but if you have any problem regarding this post, then please comment for us we will try to solve it. Thanks for visiting our site and please stay with our site for more stuff like this.

Q. How fast does the Kawasaki Ninja H2R go?

Q. How much does a Kawasaki H2R Ninja cost?